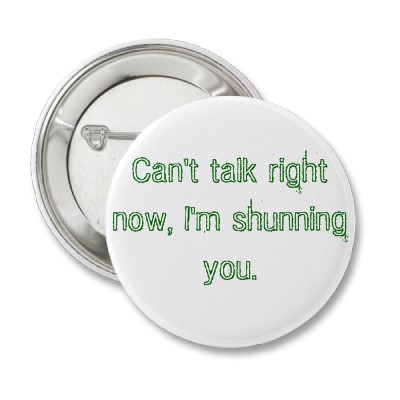 I have thought a lot about shunning recently. The definition of shunning is “to avoid deliberately; to keep away from.”  The act of shunning is common in some religions.  It’s also common among middle school girls.  Various forms of shunning are used among family, friends, neighbors, or co-workers.  For shunning to have any meaning, an emotional or social connection needs to be present.  Shunning is a form of bullying.  Shunning is also one of the most  insidious, passive-aggressive forms of abuse.

My mother regularly shunned me.  As a very little girl, I can remember asking, “Mommy, what’s wrong?” but she would refuse to answer me.  Worse yet, she refused to even look at me.  I was invisible.  I was a small child, maybe three years old, and I needed my mother.  I wanted love and reassurance, but for whatever reason, I had been bad, and I would be punished.  I was given the silent treatment.  I was a child, and I needed love.  Instead, I was shunned.

The first time I was shunned by someone other than my mother was when I was in 8th grade.  A friend of my parents’  was a corporate pilot.  That Thanksgiving weekend, he was flying the empty plane to Key West for regular maintenance and servicing of the plane.  He was bringing his wife and daughter with him on this trip,  and he invited my family to tag along.  I was so excited, and we had a wonderful time.  When I returned that Sunday evening, I called my best friend, Stacy to tell her about my weekend.  She was cold to me, and I knew something was very, very wrong.  I can still remember the cold, sinking feeling I had during that phone call.  It was over 30 years ago now, and it’s still very difficult to recall the feelings I had that night.  Stacy said that she just wanted to warn me that everyone was a little upset with me.  “Why,” I asked her.  “What’s is wrong?  What are they mad at me?”  She went on to tell me that they were sick and tired of me being a spoiled rich kid.  (I was definitely NOT rich or spoiled.)  They were tired of me getting to do special things just because I was an only child.

Many of my friends came from very large families.  I envied THEM!  I prayed and prayed for a sibling.  If I could have had one wish, I would have chosen NOT to be an only child.  I was a lonely only.  I hated being the center of attention.  I hated Christmas mornings as the only child, blowing out birthday candles with only my parents watching on.  I hated family vacations that centered around adult activities.  I hated going to fancy, adult restaurants with my parents and their friends.  I hated being around adults all the time, and this is what my friends were envying.

The rest of my 8th grade year was horrible.  I was shunned completely and totally by my regular group of friends.  They would not speak to me.  They whispered behind their hands when I was around.  To make matters worse, I was invited to a slumber party at the home of one of the girls.  I was excited, and I thought that I was going to be accepted into the group once again.  It ran in cycles.  I knew that.  Shun one girl.  They would grow tired of the perceived offense du jour, and move on to their next victim.  I thought that I was on my way back into the inner circle.  I was very wrong.  They invited me for their amusement.  I was the party game, and I spent a miserable time being group-shunned until the next morning.  When I was finally back home the next day, I vowed to never, ever go to another slumber party.

The most shameful thing was the fact that in the past I had been one of the girls who had shunned others.  If I had waited out the situation, they would have eventually moved to another girl.  I could have waited it out, but I chose to change my life.  These were not friends.  Friends don’t hurt you as a form of amusement.  I changed my friends, and I vowed to change my life.  I have never shunned again.  I’m proud to say that my daughters have never attended a slumber party.  I have never allowed it.  I have talked to my daughters endlessly about kindness, group dynamics, and the damaging abuse of shunning.

One of my staff regularly “shuns” me.  It has become an inside joke.  If any of you watch The Office, you’ll know just what I mean.  When I told her several months ago that I was considering a career move, she swiped her hand in front of me and said, “Shun.”  Now, she regularly shuns and un-shuns me.  I love her!  She never fails to make me smile with the shun/un-shun.

I have found that the most effective way to deal with shunning is to play dumb.  If you don’t act like someone is ignoring you, then they soon give up.  A colleague at work was recently peeved at me and started giving me the silent treatment.  It went on for several days.  I didn’t avoid her.  If I saw her in the hall, I greeted her in my normal manner.  I knew she had an issue with me, but I refused to take that bait.  It only took a few days, and she eventually gave up her show of silence.  After all, what was the point?  It wasn’t working on me.  That technique is really easy to implement in a work situation, but NOT easy at all when there is an emotional attachment.  What do you do when someone you love, care about, rely on, or depend on suddenly turns their back on your existence?

My therapist and I discussed shunning today.  She has become very Freudian since my last visit, and I think she may be onto something.  My mom shunned me; she motivated me with guilt.  I tried soooooo hard to be what SHE wanted.  I was not accepted or appreciated for being who I am.  The girls in 8th grade were next to shun me, but they certainly weren’t the last.  I can see the pattern now.  Too often, at my own expense, I have put myself in situations where I have tried to become who someone else wanted and needed me to be.  When I was not able to live up to their expectations, when I wasn’t able to selflessly feed someone else’s ego at the expense of my own, I was disposed of.  I was shunned.  I was no longer a person of value.

I have an everyday religion that works for me. Love yourself first,

and everything else falls into line. ~Lucille Ball