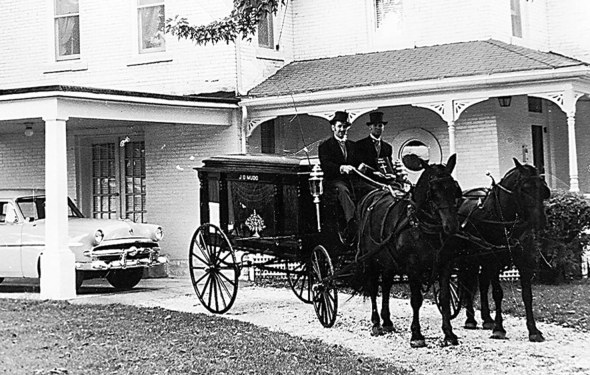 We moved back to our hometown in 1990.  We had been headed for Tennessee, but at the very last minute, we couldn’t leave.  T had been offered a job, and we had sold our first little house.  We packed up everything as we prepared to move across the country.  We loaded it all into a moving van with the help of our families.  I’ll never forget that day in 1990.  Baby Andrew was asleep in his car seat between us in the front seat as we prepared for a long drive.  We sat for a moment staring at our first house before we pulled away, and I began to cry.  My parents were not taking this move very well.  Neither were his parents.  I don’t remember who said it first, but instead of heading for Tennessee, we headed for my parents home 20 miles away.  The next day, we rented a storage unit, unloaded the truck, and began to look for a home in the town where we had once proclaimed we would never return.

There weren’t many homes for sale in a town of less than 2,000 people.  We knew the local realtor, and she set up a time for us to see what was currently on the market.  She apologized as we pulled into the driveway of the old house.  Of course, we knew this house.  Our second grade teacher had lived there.  We had both played in this neighborhood as children.  I have a vivid memory of trick or treating at this house where our teacher had lived.  It was a big old house, over 100 years old.  There was a large front porch and stained glass windows in the living room and foyer.  We were excited to see this house, but the realtor warned us before we went inside.  “This is a fixer upper,” she said.

I’ll never forget our first moments in that house.  Andrew was just learning to walk at the time.  He was with us that day.  The house was empty of furniture, and an expanse of avocado green shag carpet was in the living room.  Andrew happily staggered from room to room.  Paint was peeling off the walls and sections of the ceiling were missing.   The house had once been a funeral home.  After that, the house had been a duplex.  Eventually, the second floor had been completely ignored as if it didn’t exist, and people only lived on the first floor.  That meant that the second floor had remained stuck in a time warp.  There was a 1950’s-style kitchen where our bedroom would eventually be.  None of the bathrooms were functioning, and there were mouse droppings everywhere.  We fell in love with the place

We had two weeks until the house would be ours, but our old teacher allowed us to begin working on the house immediately.  She was thrilled that two of her former students were buying the old house.  All four of our parents helped us clean, and paint, and clean some more.  I vividly remember those days.  Music blasting, my father in-law painting in in the bathroom, my dad painting in the kitchen.  T freaking out about the old guys’ painting techniques.  Our moms were cleaning and dispensing too much advice.  Andrew stood in the playpen chattering away at anyone who happened to walk by.  By the time we moved in, we still had to flush the toilet with a bucket.  We had sheets on the windows as curtains, and we could see clear through to the basement when we were in the downstairs bathroom.  The upstairs bathroom didn’t have a toilet.  That didn’t matter, though.  We rarely went upstairs.

For years, we worked on that house.  We would have a baby and work on another bedroom.  It all blended together.  Each time we were expecting a child, we would begin to work on another project.  We refinished woodwork and beautiful hardwood floors.  Every square inch of that house held our touch and our memories.  For over twenty years, that house protected and cared for our family.  I saw the house as a living being.  I could feel its embrace.  I could feel its gratitude and love.  The house had been in a serious state of decline, and our young family brought it back to life.

One sunny Saturday, our doorbell rang, and two elderly men and a woman stood on our front porch.  They were the grandchildren of the original builder of the house.  They asked if they could come in and take a look around.  We gave them a tour, and they told us of their memories of the house.  Their grandma had hidden WWI gold bonds in the floorboards of the pantry.  They recalled the old wood stove in the kitchen and the icebox in the pantry.

It was during the funeral home days that their grandparents had lived in the house.  They showed us where the bodies had been laid out for viewing.  They recalled playing in that room and being scolded by their grandmother.  Their grandfather had been a furniture and cabinet maker.  It was natural that he would also made caskets and conduct funerals for the community.  For years after their visit, we received a Christmas card from the sister of the group.  She told us how happy she was to see a young family living in a place that she had loved so much.  The old house was good to us.  We took care of it, and in return, the old house took care of us.

The years flew by.  We loved in that house.  We lost.  We raised our children.  Our parents are gone now.  Our children are grown.  (Most of them.)  Over twenty years have passed.  Our lives, and the lives of our children, have expanded from our small hometown.  Our family has scattered.

We had a choice to make.  We could stay in the old house with only our memories; the memories of our children, memories of times spent with our parents, even our grandparents in that house, or we could leave and take a new path.  We could leave and make new memories.  Oddly enough, the choice was simple.  Neither of us were ready to spend the rest of our days with only memories as our companions.  It was time to leave the old house.

It’s been over a year now since we sold the old house to a new young couple.  Our son Luke was with us on the day we took our final walk through the old house, now empty once again.  It was somber, but not horribly sad.  We had said our goodbyes months ago.  The old house was very different on that last day than it had been on the first day we walked through its rooms.  The old house didn’t look shabby or in need of repair.  The house had been well-loved and well cared for over the years.  We had filled the house with life, good and bad times, happiness and sorrow.  Our lives had unfolded within the walls of the old house, and it was time for us to go.

While I often think about the old house, I don’t long to be back there.  It was our time to go.  Only once, just a week or so ago, did I dream of being back in the old house, but the dream was all about mistakes.  I had forgotten where I lived, and I wasn’t supposed to be there.  I had accidentally gone to the wrong home.  It was a confusing, terrifying dream.

Today I received an email from Andrew.  It was a link to a real estate listing for the old house.  The new owners have put it on the market already.  I clicked through to the listing, and I viewed pictures of each room.  Not much had changed.  My son sent me a text later that said, “It was odd, Mom.  Looking through the pictures made me feel like I was snooping around someone else’s home.”

There is a part of me that wants to rush back to my old home and save it from an unknown fate.  I want to buy it and visit it on the weekends.  I want to rescue and relive all of the memories.

But wait, we already moved back and forth on the weekends for about six months.  Each visit felt less and less like “home.”  Our time in the old house is over, and I hope with all my heart that the next owner will stay for a while and make a real life in that old house.