I live in a house that is over 100 years old.  Closet space apparently wasn’t a top priority in the olden days.  Although, from what I understand, the room that is my bedroom was once the maid’s quarters.  Kind of fitting, I think!  😉  My closet is very small.  T doesn’t even get to use it at all.  He keeps his clothes in another, far-off location.

Tonight I was in the midst of my bi-annual, change of season, clothes swap.  Out with the light summer clothes, and in with the warmer fall and winter wardrobe.  I actually enjoy this.  I sort through everything.  I bag up what I won’t wear again.  T knows a family who is always happy to take our  cast-offs.  Other items are greeted like an old friend.  I love to dig out my ratty gray sweaters each fall.  I love to wear the ugly, old gray sweaters on the weekends, and I have an impressive collection.

This year, I came across something that made me suck in my breath and rock back on my heals.  I was bending over a box, and I had to sit down on the floor.  It was my yellow skirt.  I once loved that skirt.  I purchased it online at J Crew.  It’s soft corduroy, a lovely goldenrod color, and it looks great with my tall black boots.  As much as I loved that skirt, my hand recoiled when I grabbed it out of the box.  I dropped it like it was a white-hot flame.  I almost shoved it into the give-away bag to get it out of my sight.  I haven’t worn it in almost a year.  I can remember every single, excruciating moment of that day, the day I last wore that skirt.  I remember my nervousness, nervousness turned to fear.  I remember the pacing for what seemed like hours.  I remember the phone call I eventually got the nerve up to make.  I remember the disbelief.  I remember the betrayal.  Yes, but all of that is another story.

Tonight, I sat looking at the skirt and remembering.  I held it close to me, and I was grateful that it was tonight and not that night almost a year ago.  Tonight I was safe.  The boys are happily away at school.  The girls, T and I had just finished dinner along with happy conversation.  The girls were doing homework.  T was watching football.  I was cleaning.  Most importantly, I was feeling  calm and content.  At least I had been in those moments before discovering the skirt.

As I held the yellow skirt, I thought of the other things that I hang onto that remind me of other life traumas.  I have the green Peridot earrings that I wore the day baby Adam lost his life.  They are his birthstone, and I had bought them to welcome my new baby.   Sometimes I pick them up, and I remember.  I have the dangly amber earrings that I was wearing on the day of Andrew’s accident.  I put them on each year on that date, April 21.  I wear them as a talisman and a symbol of the victory we had over tragedy.  There are many more things, other things that I have kept for years, all of them with personal meaning.  None of them represent lies and betrayal, though.  Some of these other things represent loss, yes, but they also represent love and great meaning in my life.  I held the skirt, and wondered what to do.  It’s just a skirt, and I like it.  I put it on a hanger and smoothed it out.  I’m keeping it.  It can’t hurt me now, and it represents nothing worth keeping in my life.  It’s just a skirt.

There will be other things in my life that, in the future,  will suddenly, irrevocably become triggers of memory and deep emotion.  I wonder what they will be? 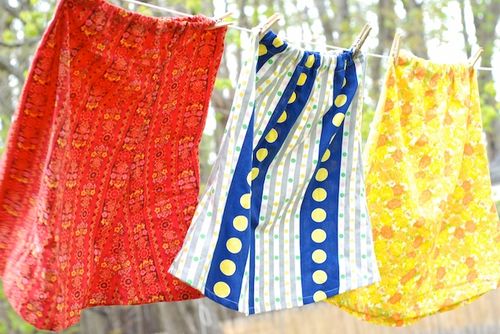 I can talk about this now.  The crisis has passed, but I’m still feeling a bit traumatized.

It has become a tradition for Emily and I.  We wear skirts all summer.  As soon as the weather warms up, Em and I ditch our pants.  That includes shorts.  As any woman knows, there is a particular sense of freedom in wearing a skirt on a warm summer day.  Our skirt wearing has nothing at all to do with being fancy.  Not at all.  Sure,  I wear skirts to work that are professional-looking.  After work, though,  or on the weekends, I wear a skirt much like any old pair of shorts paired with a tank top or a t-shirt.  Skirts are cool and airy.  They are flowing and forgiving.  Oh…and yeah….your butt can get pretty big under a skirt, and no one will notice, not even yourself.

As the weather became cooler, I began to think about blue jeans, khakis, my usual work  pants.  After a day of shivering in my office due to my bare legs, I went home and took an inventory of my closet.  As I looked through the long pants, I decided that I better try them on before I decided what to wear the next day.  Lola was in my room “helping” me.  When I tried on the first pair, she started laughing.  I was trying them on to check of moth holes or rips.  I wasn’t expecting what I actually found.   “Mom!  It looks like you painted those on your legs.”  Oh boy, out of the mouths of babes! I tried on one pair after another.  None of them fit me!

OK, I should not complain.  I know that.  I am not overweight in the least bit.  I NEVER step on the scale, and I NEVER watch what I eat.  In fact, it’s not uncommon when I order a mocha to tell them to make it with as many calories as possible.  Well, all of that caloric freedom had caught up with me.  A six-pack of Pepsi everyday probably hasn’t helped either.  After failing to find a pair of pants that didn’t look like I belonged on a street corner advertising a booty call, I ran downstairs to the bathroom and stepped on the scale.  10 pounds!  I had gained 10 pounds since the last time I weighed in.  When had that been?  Probably six months ago.  How had I not noticed this change?  I went back upstairs and hung up all of the now-too-small pants.  I had no choice but to continue to wear a skirt at this point.  I would be warm enough if I took along a sweater.  Ah…..  Skirts.  Skirts were my downfall.

After a day or two of mourning my large ass, I decided to talk to Em about the matter.  We were shopping, just the two of us.  I said, “Em, I can’t wear pants!  My butt has gotten too big.  I didn’t even know it was happening!”  She looked at me, and her mouth dropped open.  She admitted that she had the same problem.  We both said, “Damn skirts!”  We discussed it.  What were we going to do?  Buy bigger pants?  Wear tights?  We could wear skirts all winter with tights and a pair of great looking boots.  We refused to buy pants in a larger size.  That would be admitting defeat.  We didn’t want to buy “fat butt” pants.

That was a couple of weeks ago.  Many miles on the elliptical, fewer mochas, fewer Pepsi’s, and I am proud to say that I wore a pair of jeans last weekend.  OK, they were not as comfortable as last time I put them on, but at least I was able to zip them up!

I’m sipping on a Pepsi as I write this.  I’ll never give that up, and I refuse to drink diet, but I am learning moderation.  I think it’s about time.  🙂  Moderation in Pepsi.  Moderation in mochas.  Moderation is my new word.  I think it is high time that I applied a sense of moderation to many areas in my life.  Does this mean that I am growing up?  I sure hope so!